Trending
You are at:Home»Sibling Bonds»What I Learned From Winnie the Pooh 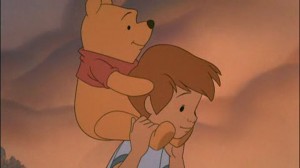 When my son was almost three years old, he said he wanted an Incredibles movie themed party. I was excited because I loved watching the movie with him and had great ideas for a theme. But right before I started to buy party supplies, he said he’d rather have a Winnie the Pooh party. I was like, “Really, Winnie the Pooh?”  Up to that time, my experience with Pooh Bear was limited. I found him to be a bear who was lazy, constantly overeating honey, and occasionally falling out of trees. Now, what kind of role model are we following here? (I know I must sound like a monster right about now.) But as my only child at the time, I was determined to make his birthday dreams come true and fully immersed myself in the Hundred Acre Wood, binge watching episodes and movies and reading the original A.A. Milne stories.

Winnie the Pooh: You’re just in time for the best part of the day!

Christopher Robin: And what part is that?

Winnie the Pooh: The part of the day…when you and me become we.

I feel it just says so much about becoming siblings. It is now not only “me”, or “I”, or “you”. It’s we. And yes your first born and second born are two unique and wonderful individuals but now they are also a team.  At the exact same time, they both become part of a we. Part of something so special. Part of a bond that can’t even be described, only experienced.  Thank you Pooh Bear!